Blame Yourself If You Keep Buying The Snake Oil


When you’re buying the fifth bottle of Snake Oil it’s time to look at yourself, not blame the salesman for his product being a fraud. 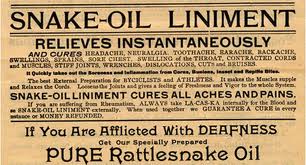 When America is told by security services experts who have served both Republican and Democratic governments, some for decades, that a foreign power attempted to and possibly did influence elections to choose her leader, you’d have thought the President Elect would listen. When the same agencies questioned the inappropriate use of private emails for state business by Hillary Clinton, the then campaigning Donald Trump threatened to investigate and even put her in jail. But no. the same agencies are saying President Putin authorised or knew of the cyber-attack on the Democratic National Committee's emails, the same, now president Elect Trump, says their advice can’t be trusted. Weren’t they, he now says, the same people who claimed there were weapons of mass destruction in Iraq leading to that country’s invasion? But America, the nation that bought the snake oil from the salesman is caught in the headlights not knowing what to think, who to believe, their security services or their greatest adversary in President Putin. Gaslighting
She can’t blame the salesman who conned her into the first bottle of snake oil now she has bought and consumed so many bottles. This is the sales man that buys 800 jobs for a $7million kickback to Carrier Corporation for keeping those jobs in the USA, and sells it as evidence of his economic wizardry. Set this against the 168,000 jobs that were legitimately created in the USA that month without crony capitalism, and that went almost unremarked in the media or by the voters.  Only a change in America and its people’s attitudes will stop her buying more and more of a product of highly dubious worth.

If America continues to lie to herself, she remains vulnerable to further gaslighting by her new elected leaders. All the snake oil salesmen are having to do is repeat the lies America tells herself and which she so desperately fears to confront. 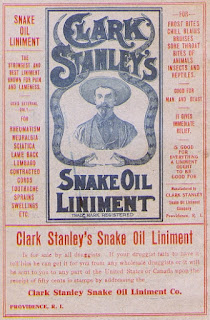 The biggest of these lies is that America is egalitarian, that she values all people equally. America says she is not racist, that her institutions are not predicated on maintaining the social economic and political superiority of any white Americans over any other Americans. But that's exactly the opposite of the truth. Any policies or activities that will deliver the prime yet  vociferously denied need to maintain white privilege there will pass muster among the masses. The nation will continue to buy the oil from the salesman as she gets sicker and sicker. The promises to “drain the swamp of establishment insiders”, to control immigration, to control abortion, to maintain law and order - all are cyphers for maintaining the established heirarchy in the USA, especially if the ostracised parties can in any way be associated with the liberalism that diminished white power in America. Many women voters went for this pitch, sacrificing their dignity on the alter of their soon to be restored ethnic superiority.  Buyer beware. Wake up. The medicine you’re being sold certainly diminishes your perceived enemies but will undermine the sovereignty, ethics, morality, cohesion and international dignity of your nation. Everyone can see America is being conned. Her enemies will enable it all they can, but only Americans can start owning their truths and lies to change this situation.
Posted by Tet Kofi at 10:04